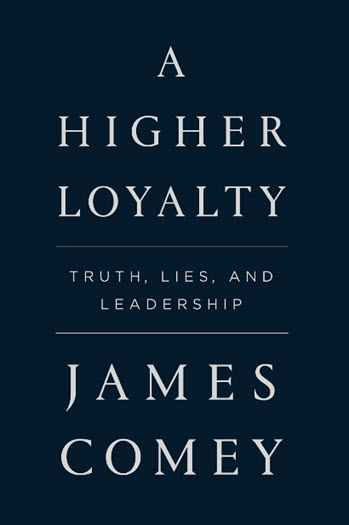 James Comey's A Higher Loyalty: Truth, Lies, and Leadership is expected to end up topping the bestseller list. The New York Times is reporting that book has already sold over 600,000 copies during its first weeek. The Times says the book now has over 1 million copies in print and publisher Flatiron Books has ordered multiple reprints.

Comey received an unwanted air kiss from Trump during their first meeting. Comey had several meetings with the President before he was ultimately fired.

Comey has been on numerous talk shows promoting the book and discussing President Trump. His TV tour began with an ABC News interview with George Stephanopoulos. He has a CNN Town Hall coming up on Wednesday, April 25 at 8 p.m. EST. Most of the conversation about Comey's book has to do with his interactions with President Trump and the notes he transcribed after his meetings. The President's firing of Comey could be used in a future obstruction of justice case.

The book sales for A Higher Loyalty are running about three times as high as Michael Wolff's Fire and Fury. Wolff's inside look at the Trump White House sold 200,000 copies during its debut week. Sales for this type of release can only continue as such a frenzied pace while the book remains in the news. That should continue with Comey still conducting interviews about the book. Mueller's investigation into possible Trump-Russia collusion will also keep the subject matter in the news.

The book is available on Amazon.com, where it has a 4.9 star average after over 800 reviews. Amazon has limited reviews of the book on its due to its controversial subject matter. The Times quotes the online retailer as saying, "We never reject reviews based on star rating or sentiment. When numerous reviews post in a short amount of time that are unrelated to the product, we suppress all non-Amazon Verified Purchase (AVP) reviews."