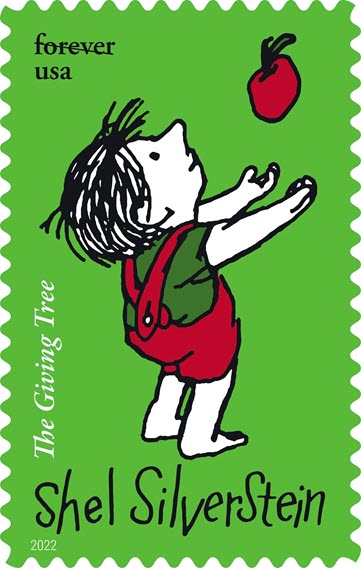 The U.S. Postal Service honored poet, children's author and illustrator Shel Silverstein with a stamp earlier this year. Silverstein's The Giving Tree is featured on the stamp.

The Giving Tree tell the story of the friendship between a tree and a boy. As the child grows older, the tree gives him its shade, apples, branches and trunk. The boy has grown into an old man by the end of the story as he rests against the stump of his beloved tree.

Other popular works by Silverstein included Where the Sidewalk Ends, A Light in the Attic, Falling Up and Everything On it."

Artist and author Dmitry Samarov was the featured speaker at the stamp dedication in Chicago. Samarov said, "I was 7 years old when my family moved to this country from the Soviet Union, so I didn't grow up with Silverstein's pictures and words. Nevertheless, I was predisposed to appreciate Silverstein's type of poetry because in the Soviet Union many of the best writers found their only means of expression through children's literature. His wit, playfulness and melancholy were felt instantly familiar — as if I'd always known them. ... Silverstein never set out to write for children. He worked for Playboy and wrote raunchy songs for rock bands. He only turned to art and writing at all once it became clear he wouldn't be in the starting lineup for his beloved White Sox."

The stamps can still be found at The Postal Store. Search for "shel" or "silverstein."