J.K. Rowling's The Christmas Pig to be Published by Scholastic 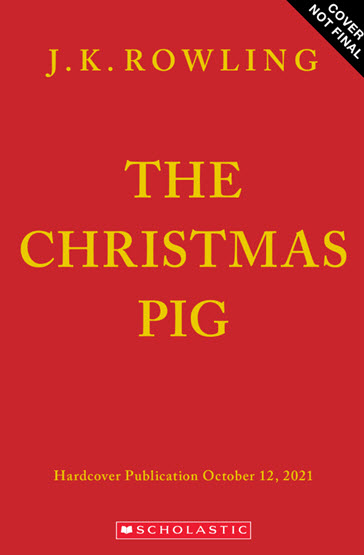 J.K. Rowling will release a new children's book in October called The Christmas Pig. The book is being published by Scholastic and illustrated by Jim Field (Cats Ahoy!). A temporary cover was also released.

The book for readers ages 8 and up. It is not a Harry Potter book and is not related to Rowling's previous novels. The Christmas Pig tells the story of a child's love for his most treasured toy (named Dur Pig) and how far he will go to find it.

A partial image of a plush pig toy can be seen in the announcement for the book on Rowling's website.

Here's a description of the book from Scholastic:

Jack loves his childhood toy, Dur Pig. DP has always been there for him, through good and bad. Until one Christmas Eve something terrible happens – DP is lost. But Christmas Eve is a night for miracles and lost causes, a night when all things can come to life... even toys. And Jack’s newest toy – the Christmas Pig (DP’s replacement) – has a daring plan: Together they’ll embark on a magical journey to seek something lost, and to save the best friend Jack has ever known.

Ellie Berger, President, Scholastic Trade, says of the book, "Timeless, thrilling, and heartwarming, with masterful storytelling: The Christmas Pig is all of these and more. A gift for children and families alike, this story about the enduring power of love can be read together as a holiday tradition, and as a classic tale to be savored, any day of the year."

The official release date is October 12, 2021. It is available for pre-order at Amazon.com.