John Green is the author of The Fault in Our Stars which became a hit movie starring Shailene Woodley and Ansel Elgort. Some of this other books include Paper Towns, An Abundance of Katherines and Turtles All the Way Down. He is popular on YouTube, Twitter and other social media sites. His is the 2nd most followed author on Goodreads. He has been called a teen whisperer, but he doesn't like the term.

John Green quotes and quotes from dialogue in his books are also popular on social media. They cover love, hope, life, hope, people and more. They are shared on Facebook, Twitter and Pinterest. Here are some pithy quotes from Green.

"What is the point of being alive if you don't at least try to do something remarkable?" - An Abundance of Katherines 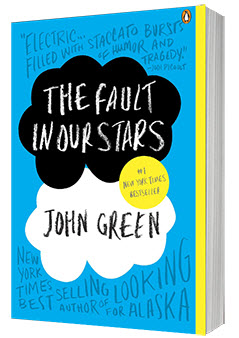 "Maybe our favorite quotations say more about us than about the stories and people we're quoting." - An Abundance of Katherines

"It starts out with one little thought, and then slowly that becomes the only thought that you're able to have. It's like there's an invasive weed that just spreads out of control." - John Green (source)

"It would be a privilege to have my heart broken by you." - The Fault in Our Stars

"Just remember that sometimes the way you think about a person isn't the way they actually are." - Paper Towns

"The world is not a wish granting factory." - The Fault in Our Stars

"If people were like rain, I was like drizzle and she was a hurricane." - Looking for Alaska

"So, when your cat licks you, he's thinking--"I love you, gigantic, hairless cat. And to show you, I will lick you." - John Green (source)

"Teenagers have more intense reading experiences because they've had fewer of them. It's like the first time you fall in love. You have a connection to that first person you fell in love with because it was so intense and unprecedented." (source)

"I fell in love the way you fall asleep. Slowly, and then all at once." - The Fault in Our Stars

"There is hope, even when your brain tells you there isn't." - Turtles All The Way Down

"That's always seemed so ridiculous to me, that people want to be around someone because they're pretty. It's like picking your breakfast cereals based on color instead of taste." - Paper Towns


You can keep up with John Green on Twitter, @johngreen. He typically tweets multiple times a day.