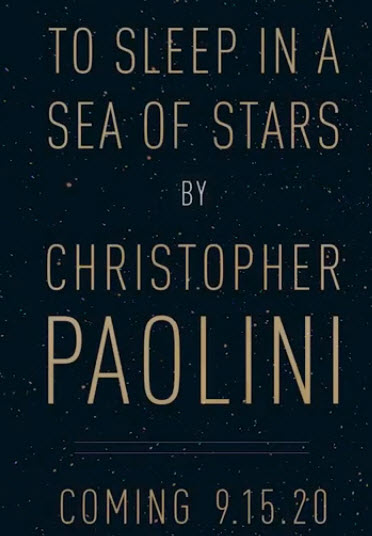 Tor Books has announced it will publish a new science fiction novel from Christopher Paolini. Paolini is best known for his high fantasy series called The Inheritance Cycle which started with Eragon.

To Sleep in a Sea of Stars was acquired by Tor through Simon Lipskar of Writers House Literary Agency in a seven-figure deal. It will be jointly edited by Devi Pillai and Executive Editor William Hinton. It is slated to be published on September 15, 2020. The cover art has not yet been released.

The novel follows xenobiologist Kira Navárez who discovers an alien relic during a survey mission on an uncolonized planet. The discovery changes the entire course of human history and takes Navarez on an epic journey to the farthest reaches of the galaxy.

Paolini says in the announcement, "I am extremely excited to be working with the awesome folks at Tor Books to publish To Sleep in a Sea of Stars. This book is my love letter to the genre of science fiction. With it, I wanted to capture the sense of wonder I feel when looking at the stars...or when thinking about the future of humanity as it expands beyond Earth. I've been working on this story for over six years, and I can’t wait for people to read it!"