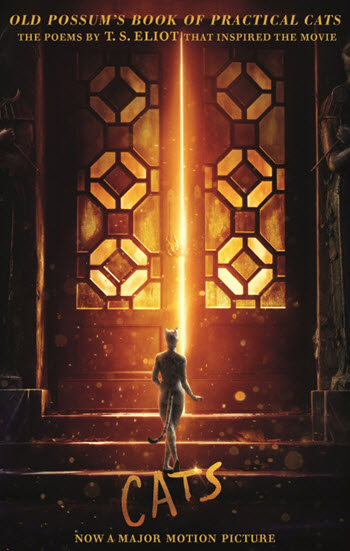 The live action film Cats is not a box office success but it should bring new attention to T.S. Eliot's cat poetry. Eliot's poetry is published by Faber & Faber, a publishing house where Eliot himself was once co-director.

Faber & Faber has published a new edition of Old Possum's Book of Practical Cats, which was first published in 1939. The book features a still from the Cats movie on the cover. It also features illustrations by Rebecca Ashdown.

Andrew Lloyd Webber set Eliot's poems to music in the Broadway musical Cats, which was very successful. Today's film Cats is losing money and is also not receiving love from critics. However, Faber & Faber may benefit despite the film's failure.

The Telegraph has a story that suggests the poetry could still "get the cream" despite the film's $100 million in losses. There might not be as much cream as originally expected but renewed interest in classics can provide a big boost in revenues for publishing houses.

The Telegraph says, "While Cats is hardly dragging people to the cinema, the Eliot estate will nevertheless be benefitting from the renewed attention on the poet's Practical Cats."

In addition to the new edition of Practical Cats there is also an audiobook as well as upcoming Cats music from Faber Music. Let's hope some readers will investigate the creative source behind the film. Here is a trailer for the Cats movie which stars Taylor Swift, Idris Elba, Judi Dench, Ian McKellen, Rebel Wilson, Jennifer Hudson, Jason Derulo, Francesca Hayward and James Corden.