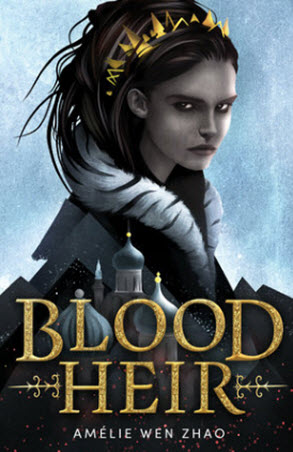 Delacorte Press has announced an upcoming young adult fantasy trilogy by Amelie Wen Zhao. The first book in the trilogy, Blood Heir, is for November 19, 2019 with a print run of 150,000. This is a considerable print run for a first novel.

The fantasy trilogy follows Anastacya (Ana), a princess of the Cyrilian Empire. Anastacya has the power to control blood. She has fled the palace having been falsely accused of murdering her father. Ana enlists the help of a con man to clear her name but she finds a great conspiracy is at work in Cyrilia.

Blood Heir was initially set to be released this summer but it was delayed earlier this year after a controversy erupted over the novel's contents on social media. A report in Publishers Weekly describes the controversy surrounding a slave auction scene in the novel. The publishing delay appears to have been a wise move. Zhao says in the announcement that she came to realize her book was being taken in a "different cultural context" than her own.

Zhao says, "In writing Blood Heir, I set out to write a fantasy with blood magic, fierce heroines, con men, and falling kingdoms with parallels to modern-day human trafficking. I researched extensively on that subject and on indentured labor throughout the world, and specifically from my heritage. It became clear to me that my book was being read in a different cultural context from my own, and so I took the time to make sure the hallmarks of this global epidemic were being incisively drawn. My hope is that the themes explored spark meaningful conversations, and that readers will become immersed in the fantasy world I have created."

Zhao's editor Krista Marino, Senior Executive Editor, Delacorte Press, says in the announcement, "We are thrilled to be publishing Blood Heir this fall, and to bring Amélie’s empowering and enthralling storytelling to a wide audience. Shedding light on a global human rights issue, Amelie's novel is true to her dual mission to raise awareness for important social issues and to write an engrossing story for readers."

Blood Heir is already for pre-order on Amazon.com.