Scholastic to Publish The Ballad of Songbirds and Snakes 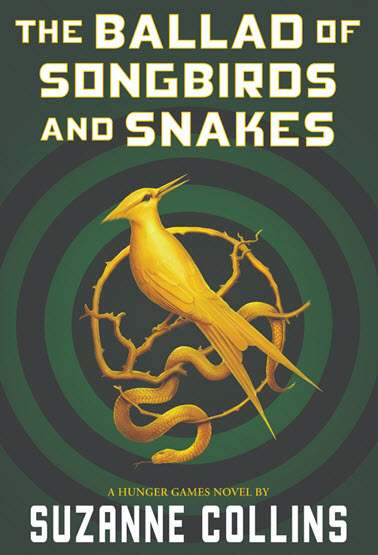 Scholastic has announced it will publish a new novel by Suzanne Collins set in The Hunger Games universe. The novel, The Ballad of Songbirds and Snakes, will be published on May 19, 2020. It will have a first printing in English of 2.5 million copies.

The Ballad of Songbirds and Snakes will revisit the world of Panem sixty-four years before the events of The Hunger Games, starting on the morning of the Tenth Hunger Games. It is the first Hunger Games title since Mockingjay was published in 2010. The series became a huge franchise with Jennifer Lawrence starring as Katniss Everdeen in the popular film series adapted from Collins' novels.

Ellie Berger, President, Scholastic Trade, says in the announcement, "It t has been thrilling to see the growing excitement from readers around the globe for this new Hunger Games novel. Suzanne Collins is an expert storyteller and world-builder, and in revisiting the world of Panem, she again raises important questions about authority, the use of violence, and the truth of human nature."

Suzanne Collins says, "With this book, I wanted to explore the state of nature, who we are, and what we perceive is required for our survival. The reconstruction period ten years after the war, commonly referred to as the Dark Days-as the country of Panem struggles back to its feet—provides fertile ground for characters to grapple with these questions and thereby define their views of humanity."

The novel is likely to revive interest in the film series and prior novels by Collins. Fans of the series were already remembering highlights and sharing them on Twitter following the novel's announcement. Scholastic is thrilled as well because the Hunger Games trilogy sold tens of millions of copies.