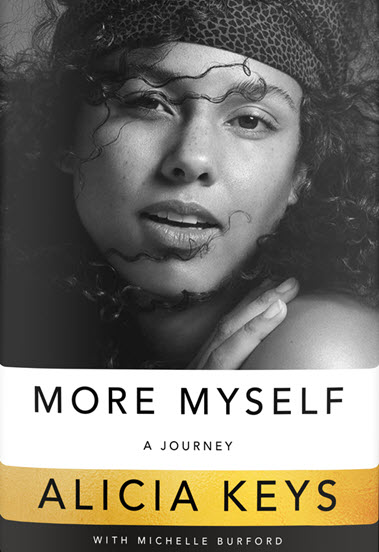 Alicia Keys has written an autobiography and it will be published by Oprah Winfrey's book imprint, An Oprah Book. The imprint from Flatiron Books - a division of Macmillan - was first announced in 2015. Alicia's book, More Myself, is described as part autobiography and part narrative documentary. Alicia wrote the book with Michelle Burford, a founding editor of O, The Oprah Magazine.

Oprah says in the announcement, "I could feel the power of Alicia's presence even before she belted out the first soulful notes of the lyrics that made her famous - 'I keep on fallin' in and out of love with you.' I knew she had all those sparkling qualities that make stars shine. More important, Alicia has navigated the spotlight and pressures of fame while retaining a humble and beautiful spirit. I am honored she chose to share her personal story through my imprint.”

Oprah also said this about Alicia's powerful presence in an introduction to her 2004 interview with Alicia Keys. More Myself is described by Flatiron as a "360-degree perspective on Alicia's path—from her girlhood in Hell's Kitchen and Harlem, to her career as a 15-time Grammy Award-winning artist, songwriter, and record producer, to the process of self-discovery she's still navigating." It will arrive in bookstore on November 5, 2019.

The following video announcement with Alicia and Oprah was also released. Alicia posted the video on her YouTube channel. She says, "Thank you, Ms. O for the opportunity to share my truth as the first release of your new book imprint. Our journeys are beautifully woven together and our messages are similar: Now, more than ever, it’s time to continue to honor ourselves by walking more unrelentingly in our authenticity, no matter what!"

And here's Alicia reading for her new book and talking about the power of words.