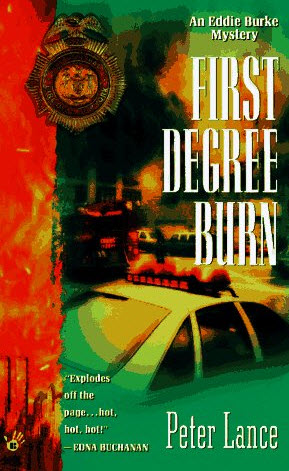 In Manhattan, a sociopathic serial arsonist nicknamed "Superman" torches a historic Lower East Side row house in a horrible act of arson which kills an infant and severely injures New York Fire Marshall Eddie Burke. When he gets back on the job, Eddie is called to investigate another fire in which an art restorer in Soho dies while restoring a long-lost WPA mural. The fire looks like a cover-up for a lovers' quarrel which ended in murder, and the case is closed. But for Eddie Burke it's only the beginning of a deadly mystery as more people die for the missing mural and Eddie is drawn into a spiderweb of deceit and lies. His search for the truth takes him from the dregs of New York's culture to the bastions of the rich and powerful.

Peter Lance, in his novel debut, has penned a winner which sizzles with excitement and scorching, non-stop action. Eddie Burke is a hero for the 90s. Reeling from a painful divorce and fighting to stay out of the shadow of his legendary hero-cop father, Eddie is a complex man with hints of being a romantic at heart whose passion for the truth could easily get him killed. Lance creates equally fascinating female characters with his creation of the troubled art history professor Caroline Drexel and Auschwitz survivor and therapist Dr. Helen Liebman, who becomes mentor and mother figure to the beautiful, rich, but tortured Caroline. Lance deftly plays on stereotypes of the beautiful but weak female leads of older, traditional hardboiled novels and turns the stereotypes upside down. Caroline has reserves of strength that are particularly exhibited in one hilarious scene in the hospital where she successfully does battle with a bureaucratic ER nurse who is more interested in filling out insurance forms than in saving the injured Eddie's life.

Meticulously researched and written with the authority that one would expect from an award-winning investigative journalist who went undercover in Chicago in the mid-80's to crack an arson-for-profit ring, First Degree Burn is jam-packed with fascinating details of both the underbelly and the top strata of New York society. Lance deftly weaves a fascinating tale of a mystery involving a lost mural painted in the 1930's that holds a deadly secret and a mysterious dream with the gut-wrenching story of Eddie's relationships with his father and with Caroline (who has her own demons), without ever losing the threads of these different themes. Lance's eye for detail, his brilliance at painting a vivid picture of the sounds and scenes of New York and his gift for storytelling add up to a fascinating book that is impossible to put down. Whether you're a hardboiled fan, thriller fan or a mystery fan there's something for everyone in this outstanding debut. Welcome, Eddie Burke, we're glad to have you.