"The New Colossus" is a poem by 19th century poet Emma Lazarus. It is also known as The Statue of Liberty poem. It was written on November 2, 1883. The poem can be found on The Statue of Liberty. It is printed on a bronze plaque mounted inside the lower level of the pedestal.

Not like the brazen giant of Greek fame,
With conquering limbs astride from land to land;
Here at our sea-washed, sunset gates shall stand
A mighty woman with a torch, whose flame
Is the imprisoned lightning, and her name
Mother of Exiles. From her beacon-hand
Glows world-wide welcome; her mild eyes command
The air-bridged harbor that twin cities frame.
“Keep, ancient lands, your storied pomp!” cries she
With silent lips. “Give me your tired, your poor,
Your huddled masses yearning to breathe free,
The wretched refuse of your teeming shore.
Send these, the homeless, tempest-tost to me,
I lift my lamp beside the golden door!" 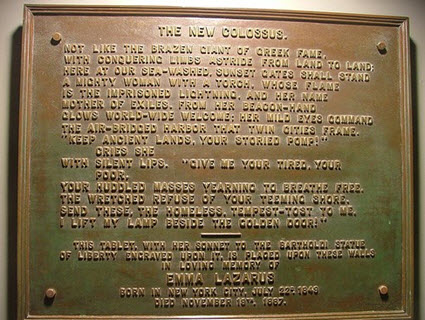 
The Statue of Liberty - Ellis Island Foundation says the sonnet was written for an auction to raise funds for the pedestal. The bronze plaque containing the poem was added to the statue's pedestal in 1903 according to the Wikipedia entry.

The "brazen giant of Greek fame" referenced in the poem is the Colossus of Rhodes, an enormous statue in that was built in 280 BC to celebrate a military victory. Lazarus's poem says the Statue of Liberty is a welcoming statue and not a statue meant to represent power.

The Library of Congress has audio here of Alicia Ostriker reading the famous poem. Ostriker says in an essay, "For me, this poem’s beauty cannot be separated from my family’s history. All my grandparents came to this country in the 1880s, at just the moment that inspired the poem. They were escaping poverty and pogroms. To them as Jews, America was the land of opportunity, of hope for the hopeless. None of them ever became rich, but they survived."