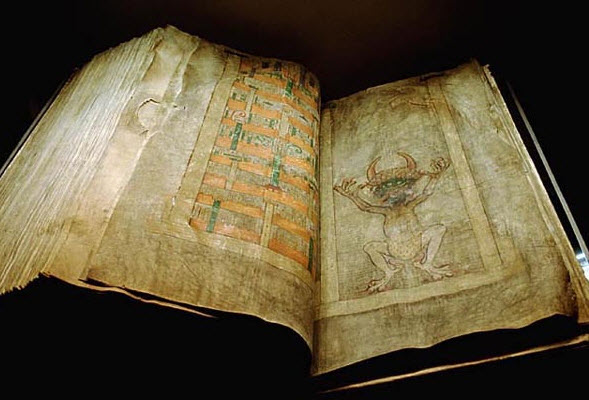 The Codex Gigas is an illustrated medieval manuscript that is also known as The Devil's Bible. It is also the biggest surviving European manuscript. It is currently located the National Library in Stockholm.

The book is known for its enormous size and the large illustration of the devil in the middle. The book contains a medieval version of the Bible. The book also contains two historical texts by Flavius Josephus, an Encyclopaedia of the middle ages by Isidore, a Chronicle of Bohemia by Cosmas from Prague, medical texts and a number of other short texts.

The Codex Gigas was made at a monastery in Bohemia (now the Czech Republic) in the late 13th century. It is believed to have been written solely by one very dedicated scribe using a small script called carolingian minuscule. This would have taken a very long time. The National Library of Sweden estimates that it could have taken up to 20 years for the scribe to complete the book.

This video sites some legends and rumors about the book that have not been confirmed. This includes the legend that the book was written with the help of the devil. The National Library of Sweden says the origin of this legend is unknown and is "clearly without any basis in truth."

The Codex Gigas has survived fires and wars. The book's journey is also described in the video above by Mystery History. The book was taken from Rudolf II's castle in Prague in 1954 during the Thirty Year Wars. It survived a fire in the royal castle in Stockholm in 1697 by being thrown out of a window. The book hit and injured a person standing below the window. It would not feel good to be hit by a falling 165 lb. book.

The National Library of Sweden says, "The Devil’s Bible was rescued from the flames by throwing it out of a window, whereupon the leaves fluttered away and are still missing today, and the tome itself apparently injured a bystander who was underneath it – at least, if we are to believe Johann Erichsons, vicar of the German Church in Stockholm, whose narrative was published in Hamburgische Beytrage fifty years later."

National Library in Stockholm - The library site is the richest source for the Codex Gigas. You can browse the manuscript online. It also includes photographs of the book and explains the history and contents of the massive book.

Wikipedia: Codex Gigas - The Wikipedia entry for Codex Gigas provides an overview of the book with a detailed description and photographs.

Atlas Obscura: Codex Gigas: Atlas Obscura explores the concept of a single scribe having written the Codex Gigas. The article also links to a longer feature.