The Meaning of [sic]

Sic is used to let the reader now that this is exactly how a quoted block of text was written. It is usually surrounded by brackets. Some organizations put sic in italics instead of using brackets. Insert [sic] directly after the grammatical error or typo if possible.

Some of the most common uses of sic are when an advertisement with an error or a tweet with a spelling or grammar error are cited by a journalist. Alternatively, a writer can paraphrase what was said and ignore the typo or grammatical mistake to avoid hurting someone's feelings. 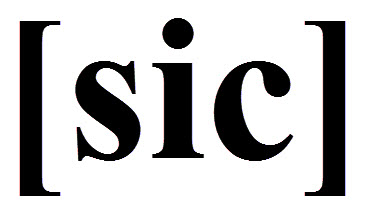 An article from the Columbia Journalism Review advises that [sic] should not be used frequently. The also note that Twitter, Facebook and email have increased its usage and need. The quote Garner’s Modern American Usage as saying the use of [sic] has "skyrocketed since the mid-20th century." We aren't surprised.

Some of President Trump's tweets are frequently reported with the use of [sic]. For example, President Trump has misspelled special counsel several times. The error would be reported as, "With all of the illegal acts that took place in the Clinton campaign & Obama Administration, there was never a special councel [sic] appointed!"

This lets the reader know that the President spelled the word this way and it is not an error made by the journalist or an error missed by the newspaper's editorial team.

The Cambridge Dictionary entry for sic uses an example of typo on a sign: "The sign said, "Closed on Wendsday" [sic]."

Dictionary.com notes that [sic] can also be used to quote a speaker who has accidentally misspoken. It can even be used to indicate a missing word.

Merriam-Webster defines the adverb sic as meaning "intentionally so written." They also have a podcast about "sic" from when it was featured as the Word of the Day. They also say it comes from Latin and means "so" or "thus."