The origin of the Mary Sue term can be found in fan fiction. Know Your Meme traces that origins to a parody of Star Trek fan fiction called "A Trekkie's Tale." This short tale by Paula Smith described a young female character (Mary Sue) that was a critique of a character she frequently observed in Star Trek fan fiction from 1970s zines. The character created by Smith has evolved into Mary Sue coming to mean any character that is too perfect, too beautiful and wise beyond her years. TV Tropes expands on the Mary Sue concept with other types of Mary Sues, such as the Anti-Sue. They also note that what classifies a Mary Sue character has become more and more difficult to nail down due to its increasing use.

The Wikipedia entry for Mary Sue notes that there has been same criticism or backlash at the concept. One major criticism is that beginning writers might be hesitant to write out of fear of creating a Mary Sue. Fear of criticism is never a good reason to not write. You have to practice to get better. Some writers practice by putting themselves - or a perfect hero - into situations. There is always time for editing if you have written a story that is centered around a character that is too perfect. Young authors also shouldn't worry too much as the term Mary Sue is now also used as a trolling attack and trolls should be ignored.

It should be fairly obvious to you that you have an overly perfect character. There are tests that can help you make sure your character is not a Mary Sue. The ultimate decision about your characters is always yours. If your character ticks the boxes of all the adjectives below they are certainly crossing into Mary Sue territory. If you have created a Mary Sue then at least put her up against an equally perfect villain to make your story interesting. 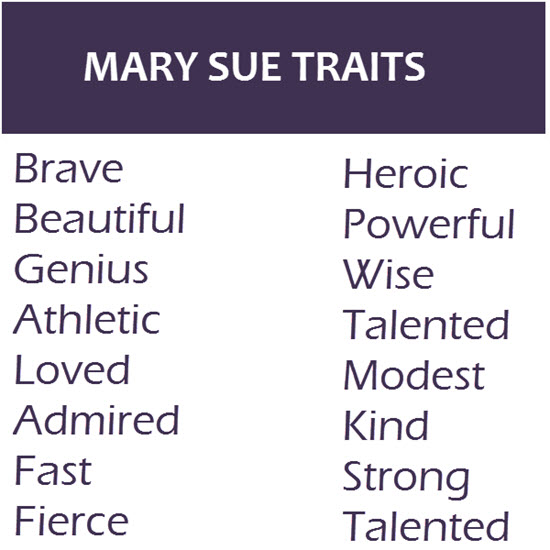 Here is a list of some of tests and articles offering tips for avoiding creating Mary Sues.