The correction guy meme is another type of grammar meme. A retro black-and-white image of a man wearing a suit is used for this meme. The man is holding up his hand as if to say stop or "wait just a minute." He is generally used to point out a grammatical error or a typo. Sometimes more than one of the images are used. Sometimes the correction guy can get a little rude. He can also be polite like in this image. 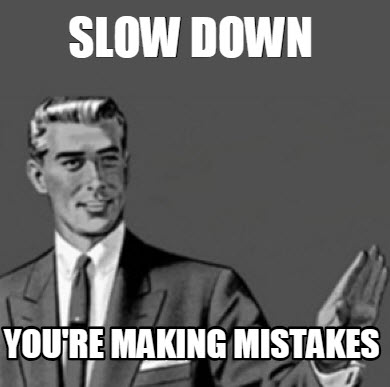 Know Your Meme's entry for Correction Guy dates the origin to Flickr in October, 2011. There are Correction Guy meme generators available on Imgflip and Memecreator.

Frequently it is "your" and "you're" that Correction Guy is correcting on Facebook, Twitter and other social media sites. Sometimes the image Correction Guy is used along with the correction and two asterixis - such as "**We're" - to indicate that the wrong word or incorrect spelling of the word was used. The multi-pane version of the meme sometimes ends rudely in "kill yourself." You can see an example here where the Correction Guy is used to correct two errors on a sign a woman is holding up.

You can find more memes in our writing memes section.