Winnie-the-Pooh is an lovable bear character created by author A.A. Milne. Milne wrote several Pooh books and stories. The first book published was Winnie-the-Pooh (1926). The second book, The House at Pooh Corner, was published in 1928. Milne's Pooh bear children's character was also featured in two of Milne's poetry collections: When We Were Very Young (1924) and Now We Are Six (1927). The books featuring Winnie-the-Pooh were illustrated by E.H. Shepard.

Winnie-the-Pooh has been adapted into television shows, cartoons, films, plays, video games and more. The Wikipedia entry has a good collection of them. Many of them are Disney productions because Disney took over the rights to the characters in the 1960s. 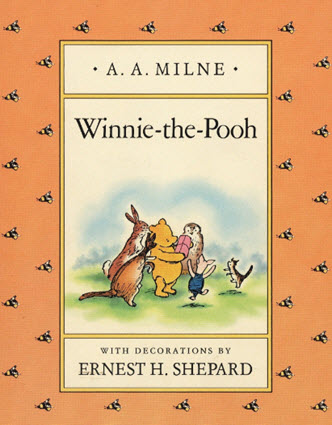 Here are some wonderful quotes from Milne's Winnie-the-Pooh books:

Birthdays: "Nobody can be uncheered with a balloon." Pooh said this to Piglet after Piglet came up with the idea of giving Eeyore a balloon as a birthday present. We love the word uncheered.

Eeyore's Weather Forecast: "I shouldn't be surprised if it hailed a good deal tomorrow. Blizzards and what-not. Being fine today doesn't mean anything. It has no sig - what's that word? Well, it has none of that. It's just a small piece of weather." - from The House at Pooh Corner.

11 O'clock Meal: Pooh loved to eat at eleven: "Nearly eleven o'clock," said Pooh happily. "You're just in time for a little smackerel of something." from The House at Pooh Corner.

Eeyore on Writing: "This writing business. Pencils and what-not. Over-rated, if you ask me. Silly stuff. Nothing in it."

Fitness: "A bear, however hard he tries, grows tubby without exercise."

Listening: "If the person you are talking to doesn't appear to be listening, be patient. It may simply be that he has a small piece of fluff in his ear."

Blinching: "You only blinched inside and that's the bravest way for a Very Small Animal not to blinch that there is." Pooh to Piglet in The House at Pooh Corner.

Jagulars: Pooh on Jagulars in The House at Pooh Corner: "That's what Jagulars always do. They call 'Help! Help!' and then when you look up, they drop on you."

Expeditions: "Oh! Piglet," said Pooh excitedly, we're going on an Expotition, all of us, with things to eat. To discover something."

Pooh on Poetry: "They wanted to come in after the pounds, so I let them. It's the best way to write poetry, letting things come." - The House at Pooh Corner.

Spelling: Wobbly writing in Winnie-the-Pooh: "Because my spelling is Wobbly. It's good spelling but it Wobbles, and the letters get in the wrong places."

On Aging: Piglet tells Pooh, "Promise you won't forget me, ever. Not even when I'm a hundred." - The House at Pooh Corner.

Good Morning?: In Winnie-the-Pooh, Eeyore greets Pooh by saying, "Good morning, Pooh Bear. If it is a good morning. Which I doubt."

Motivation: A motivational quote from Pooh: "You can’t stay in your corner of the Forest waiting for others to come to you. You have to go to them sometimes."

Bravery: Piglet on being brave: "It is hard to be brave," said Piglet, sniffing slightly, "when you're only a Very Small Animal." - from Winnie-the-Pooh.

Timelessness: "Wherever they go, and whatever happens to them on the way, in that enchanted place on the top of the forest, a little boy and his Bear will always be playing."