Lewis Carroll was an English Writer and mathematician. He wrote two books featuring his famous heroine Alice. They were Alice's Adventures in Wonderland (1865) and Through the Looking-Glass and What Alice Found There (1871). This is a collection of great quotes from the two Alice books. 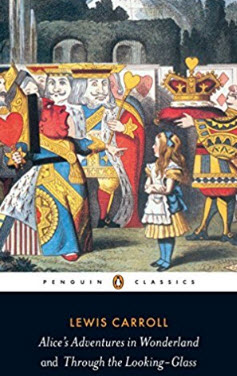 Quotes From Alice's Adventures in Wonderland

"The chief difficulty Alice found at first was in managing her flamingo."

"Speak English! I don't know the meaning of half those long words, and, what's more, I don't believe you do either!" - The Eaglet

"Begin at the beginning and go on till you come to the end: then stop." - The King

"I don’t like the look of it at all, however, it may kiss my hand if it likes." - The King

"Off with her head!" - The Queen says this multiple times. She also targeted males with "Off with his head!"

"I'm afraid I can't put it more clearly, for I can't understand it myself to begin with; and being so many different sizes in a day is very confusing." - Alice

"I could tell you my adventures—beginning from this morning, but it's no use going back to yesterday, because I was a different person then." - Alice

"Give your evidence and don't be nervous, or I'll have you executed on the spot." - The King

Quotes From Through the Looking-Glass and What Alice Found There

"One thing was certain, that the white kitten had had nothing to do with it: — it was the black kitten's fault entirely."

"When I use a word, it means just what I choose it to mean — neither more nor less." - Humpty Dumpty

"When I make a word do a lot of work like that I always pay it extra." - Humpty Dumpty

"Well, it's no use your talking about waking him, when you're only one of the things in his dream. You know very well you're not real." - Tweedledum

"You may call it nonsense if you like, but I've heard nonsense, compared with which that would be as sensible as a dictionary!" - The Red Queen

"A slow sort of country! Now, here, you see, it takes all the running you can do, to keep in the same place. If you want to get somewhere else, you must run at least twice as fast as that!" - The Red Queen

"What impertinence! I wonder how you'd like it, if I were to cut a slice out of you, you creature!" - The Pudding

"When I was your age, I always did it for half-an-hour a day. Why, sometimes I've believed as many as six impossible things before breakfast." - The Queen


Note: The cover pictured above is from Alice's Adventures in Wonderland and Through the Looking-Glass (Penguin Classics)