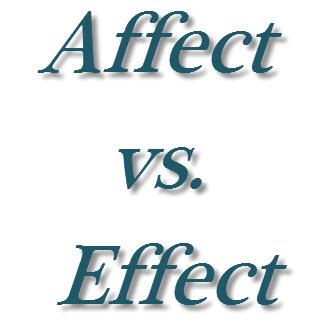 Affect vs effect are two words that are frequently confused and incorrectly transposed. Many English teachers and grammar experts go with the verb and noun explanation because it works in most situations. Affect is usually a verb and effect is usually a noun. For example, you might ask "What is the effect of using the Internet for consecutive hours?" or "How will using the Internet for hours with no break affect you?"

Confusion over the similar sounding words grows when the exceptions arise. Effect can be a verb in some contexts, such as when you want to effect change, and affect can be a noun (but it usually isn't). The Oxford Dictionaries created a visual guide to explain it. They say effect as a verb means "to bring about." They also say on YouTube that the noun use of "effect" is usually only in a formal context.

Another helpful tip can be found on Vocabulary.com. They say "remember that affect comes first alphabetically, and an action (to affect) has to occur before you can have a result (an effect)." Here's another video about the two commonly confused words from Grammarly. Take a look: