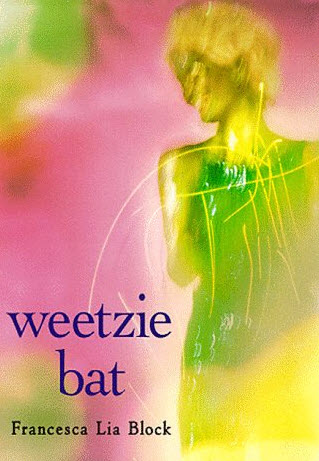 In 1989, Francesca Lia Block burst upon the young adult book scene with her somewhat shocking story of Weetzie Bat and her wild L.A. friends. Fresh and innovative, the story astounded critics and was voted as an ALA Best Book for Young Adults and an ALA Recommended Book for Reluctant Young Adult Readers. Now, ten years and numerous books later, the original holds up quite well.

Weetzie Bat is a blond, pixy-like high school girl who lives in Los Angeles with her divorced, drunken mother. But Weetzie sees L.A. with its plastic palm tree wallets and tomahawks, its cheap cheese and bean burritos, and its plethora of ducks (read good looking young men) as a magical place. With her gay friend Dirk and her dog Slinkster Pooch they tool around in Jerry, a 1955 Pontiac. When Weetzie is given three magical wishes, she wishes for true love for her and her friend Dirk and a house to live in happily ever after. She gets her wishes and the trio live an offbeat lifestyle, while never giving into the depression that many people would feel from confronting death of a parent, AIDS and loss of a love.

Block's prose is spare, and almost simplistic on the surface. But beneath is a wealth of meaning, and the simple, offbeat tale has more to say than it appears at first glance. Although the lifestyle of Weetzie and her friends might be appalling to some parents (the hippie-like espousal of free love and motherhood without marriage, for example), the attitudes towards violence, drugs and racial prejudice convey very positive messages. Teens will appreciate the realistic portrayal of life in a big city, and will certainly laugh at some of Weetzie's adventures. And, after all, it's just a fairy tale, right?