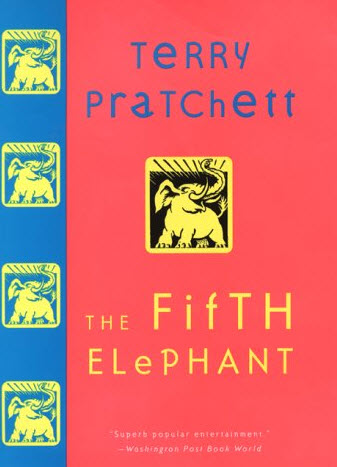 Everyone knows that Discworld is held up by four elephants standing on the back of a large turtle who is flying through space. Now it turns out that there actually was a fifth elephant, which came hurtling to the ground. The resulting crash created immense deposits of minerals and fat, especially in the land of Überwald which is peopled by dwarves, werewolves and vampires. The ruler of the city of Ankh-Morpork, Lord Vetinari, sends able Captain of the Watch Samuel Vimes to Uberwald with his wife and an assortment of companions.

Vimes' mission is to assist the dwarves in finding the missing Stone of Scone, the emblem of kingship which must be found before the next king can be installed. He also must try to avert the civil war that has been brewing there for some time -- and solve a murder while he's at it. Naturally, should Vimes also return home with some valuable mining rights that would be all for the better.

The Fifth Elephant is Pratchett at his best. The art of satire is a difficult one, and Pratchett truly is a master of the form. His latest work parodies everything from diplomacy, royalty, werewolves, vampires, communications, and traffic cops -- just to name a few. The scene where a naked and freezing Vimes is hunted by the werewolves through a wintry forest in Überwald (think The Most Dangerous Game set in a Chekov play) is the kind of macabre yet hilarious scene that only Pratchett could pull off. It's laugh out loud funny and immensely entertaining. If you haven't made the acquaintance of Terry Pratchett, by all means remedy the situation immediately. For longtime fans, you're in for a treat. Highly recommended.

The Fifth Elephant by Terry Pratchett


Note: We may receive a commission through product links in this article.