Sir Stalwart: Book One of The King's Daggers Review 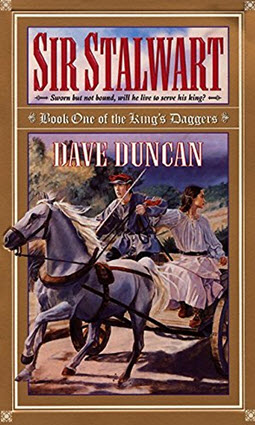 
Bestselling fantasy novelist Dave Duncan mines his popular King's Blades series to create a spin-off, young adult series called The King's Daggers. Sir Stalwart is the youngest and the smallest of the senior class at the Ironhall academy, but he is also the fastest runner and a fantastic swordsman. From the senior class, the next group of boys will be chosen to be a member of the of the King's Blades, that elite group of swordsmen sworn to service of the King, in an ancient and magical ceremony. Sir Stalwart, known by the unfortunate nickname of Wart to his fellow students, gets publicly expelled from Ironhall before he can officially become a King's Blade. But there is more to Stalwart's expulsion than meets the eye, and soon the former student is swept up in a maelstrom of danger, intrigue and adventure. With Emerald, a young woman who has just been expelled from the order of the White Sisters, (the order that can sniff out magic and are used to detect sorcery), Stalwart must stop an assassination plot against the king and foil those who would destroy the kingdom with evil magic.

Sir Stalwart is classic Dave Duncan: breathtakingly exciting with vivid characters and a fast-moving plot. We also get some fascinating background material about the training of the White Sisters and the role of the King's Blades in the Monster War. Written for the young adult market, the King's Daggers books are shorter than those in the King's Blades series, and are somewhat simplified as to the reading level. But the excitement, interesting plot, and intriguing and dangerous world of Chivial are still here, and the only complaint readers will have is that the story ended too soon. Highly recommended.