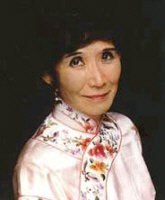 Adeline Yen Mah was born in Tianjin, China. Her mother died two weeks after her birth and Adeline was considered to be a source of bad luck by her family. Her father remarried a beautiful Eurasian woman one year later. She was half French and half Chinese and divided the Yen family into two different classes. Adeline's father, stepmother and their two children were the upper class, whereas Adeline and the four other step-children by the first wife were considered second class.

Falling Leaves recounts the story of Adeline's life. At fourteen, she won a writing competition which convinced her father to send her to study in England. She attended medical school, graduated as a physician and established a thriving medical practice in California.

After the publication of Falling Leaves, which sold over one million copies world-wide, Adeline gave up medicine to write full-time. Chinese Cinderella is her autobiography written for children. Her third book Watching the Tree is a book of Chinese philosophy.

Adeline is happily married to Robert A. Mah. They have two children and live in California and London. In this interview, Adeline discusses how she came to write her latest book, Chinese Cinderella and the Secret Dragon Society.

What inspired you to begin writing Chinese Cinderella and the Secret Dragon Society?

I received many emails after the publication of my first children's book, Chinese Cinderella. (Please visit my website at adelineyenmah.com and read the letters). Some of the children begged me to write kung fu fairy tales similar to the ones I used to write in Shanghai.

During my miserable childhood, my only escape was to immerse myself in reading. Gradually, the characters in my books became more real than my tormentors at home. They inspired me to write novels of my own, incorporating stories told to me by my teachers and classmates. While writing, I would forget my troubles and indulge in a world of my creation. Over there in fantasyland, the rules were fair and anything was possible.

Chinese Cinderella and the Secret Dragon Society is modeled on a story I first wrote at the age of ten. I titled that first book The Ruptured Duck, which was the name of an American airplane that crashed in area of China controlled by the Japanese during the Second World War.

The novel is based on a true incident. Can you tell us a little about it, and about any research you carried out in order to write the book?

Japan bombed Pearl Harbor on December 7, 1941 and declared war on the United States the same day. In retaliation, President Roosevelt sent sixteen planes under Jimmy Doolittle to bomb four Japanese cities on April 17, 1942. After the raid, the Americans flew to China, planning to land in an area controlled by Chinese troops. Unfortunately, they ran out of fuel and three planes crash-landed on Japanese-occupied territory. A few airmen were caught but the majority escaped into western China with the help of the local Chinese people.

In writing my book, I first watched the movie Thirty Seconds over Tokyo starring Van Johnson and Spencer Tracy. This was a film I never got to watch as a child. (It can be rented from most public libraries and video stores.) Then I went to the library at the University of California, Irvine, and read widely on the subject.

To my surprise, many emotions I had as a child-writer came back when I began. My imagination soared to the same magical land I used to roam as a ten-year-old when I wrote The Ruptured Duck.

The heroine and narrator CC is twelve years old. She is driven out of her home by her father after a quarrel with her step-mother. Not knowing where to go, she joins a group of orphaned boys under Grandma Wu, a venerable kung fu teacher and head of the secret Dragon Society. The children become secret agents and help Grandma Wu rescue American airmen from the Japanese.

What do you most admire about your character CC? What qualities does she have (or do people in real life have) that you find the most admirable?

During my unhappy childhood, my biggest fear was to be thrown out of the house by my parents. My stepmother Niang threatened to do so many times. Paradoxically, despite my terror of being abandoned, I often dreamt of running away. It has been said that a writer’s work is dictated by her life. In this novel, I gave CC the courage I never had. CC did what I dared not do in real life. She ran away and made a happy new life of her own.

CC was brave, honest and determined. Having been thrown out of her house by her father and stepmother, she accepted what she could not evade and dealt with it. She rose to the challenge, learned kung fu, became a secret agent, and successfully rescued four American airmen from jail. In doing so, she not only triumphed over her tragic circumstances but proved that a person's destiny can be altered through her own efforts.

Was it exciting for you to write such a fast-paced adventure novel? Did you always know what would happen next?

Yes, I enjoyed every minute. At times, I felt I possessed a magic pen because the book appeared to be writing itself. An internal time machine would turn the clock back every time I wrote. I was no longer a woman physician with two grown children. I became instead the little ten-year-old child racing against the clock to finish before Monday, so I could bring my novel to school and show it to my classmates.

When you were just 14, you won a writing competition which took you to a whole new life in England. Do you have any advice that you would share with children who want to write?

Yes! Read as much as you possibly can. Never be without a book in your hands wherever you are. Books are not lifeless stacks of paper filled with boring facts and figures. Each is the essence of the mind of a writer trying to communicate with you, (the reader), one on one.

Keep a diary and write something in it every day, including book-reviews. The more you write, the better your writing will be. When you re-read your own diary as a 20-year-old, you'll be amazed at what you wrote earlier.

Finally, dare to enter as many writing competitions as you can. Don't be intimidated. As long as you enter, you might win. If you don't, you'll have destroyed your chance of winning before you ever began.

Posted with permission of HarperCollins Publishers.