Winter means colder temperatures, hibernation and snow. In some less hospitable regions it can be a frigid and frightening time of the year. In many countries and religions winter is also a time when holidays are celebrated. Here are some pithy quotes about winter from famous authors and poets.

"Blow, blow, thou winter wind, Thou art not so unkind As man's ingratitude; ." - As You Like It - William Shakespeare

"This day we found ourselves completely hemmed in by the ice, and our prospects looked cheerless indeed. A strong gale blew, during the whole forenoon, from the northeast, and drove large cakes of the drift against the rudder and counter with such violence that we all trembled for the consequences." The Narrative of Arthur Gordon Pym - Edgar Allan Poe

"October extinguished itself in a rush of howling winds and driving rain and November arrived, cold as frozen iron, with hard frosts every morning and icy drafts that bit at exposed hands and faces." - Harry Potter and the Orders of the Phoenix - J.K. Rowling

"I wonder if the snow loves the trees and fields that it kisses them so gently? And then it covers them up snug, you know, with a white quilt; and perhaps it says, 'Go to sleep, darlings, till the summer comes again." - Through the Looking Glass - Lewis Carroll

"What good is the warmth of summer, without the cold of winter to give it sweetness." - Travels with Charley: In Search of America - John Steinbeck

"For many years I was self-appointed inspector of snow-storms and rain-storms and did my duty faithfully." - Walden - Henry David Thoreau 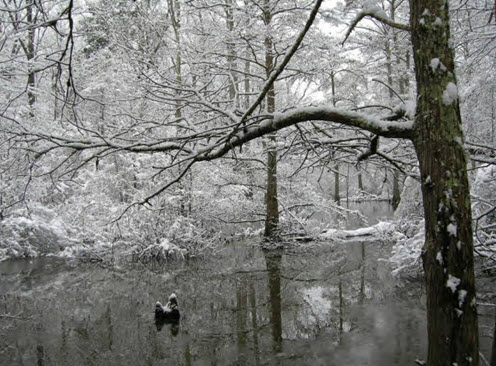 "So comes snow after fire, and even dragons have their endings." - The Hobbit - J.R.R. Tolkien

"October extinguished itself in a rush of howling winds and driving rain and November arrived, cold as frozen iron, with hard frosts every morning and icy drafts that bit at exposed hands and faces." - Harry Potter and the Order of the Phoenix - J.K. Rowling

"Stern Winter loves a dirge-like sound." - "On the Power of Sound - William Wordsworth

The snow did not even whisper its way to earth, but seemed to salt the night with silence" - Brother Odd - Dean Koontz

"I wonder if the snow loves the trees and fields, that it kisses them so gently?" - Lewis Carroll

"The wind had dropped, and the snow, tired of rushing round in circles trying to catch itself up, now fluttered gently down until it found a place on which to rest, and sometimes the place was Pooh's nose and sometimes it wasn't..." - The House at Pooh Corner - A.A. Milne

"Nature is full of genius, full of the divinity; so that not a snowflake escapes its fashioning hand." - Henry David Thoreau

Winter hung in there, like an invalid refusing to die. Day after grey day the ice stayed hard; the world remained unfriendly and cold." - Odd and the Frost Giants - Neil Gaiman