Thomas and the Dragon Queen 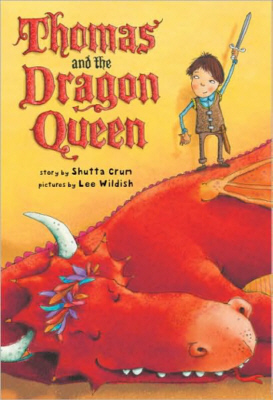 Thomas and the Dragon Queen is a story about an unlikely hero. He triumphs not only against insurmountable obstacles, but must also battle against prejudice. The adults in his world doubt his abilities because of his small size. Being a twelve year-old boy is in itself a problem. He has many worries, but the most overriding worry is, "how tall a person am I going to be?"

Although Thomas is small for his age, he is very firm in knowing right from wrong, and he is good at managing his younger siblings. The best thing about Thomas is that he does not shrink from problems; he solves them . This quality is noted by a knight whom Thomas had helped after an accident. Thomas is invited to the castle to begin training as a page and later a squire. When all of the knights are busy fighting a war, the king sends Thomas off to rescue the Princess Eleanor from a terrible dragon. This most unlikely of heroes sets off on a seemingly impossible quest.

The story of Thomas is told in a light and whimsical way. Mixed in with interesting details about medieval life is the story of a boy who never lets go of his dreams or his principles. As he is beset by adventures that range from the ridiculous to the fanciful, Thomas solves each impossible problem with courage and practicality. As he meets each challenge Thomas's thoughts teach the reader a lesson in never giving up. One of the most priceless lessons comes when Thomas meets the Dragon Queen and learns that things are not always as they seem.

Lee Wildish matches his illustrations to the story with his quirky and sometimes comical drawings. Clearly, the story of Thomas is a comic fairy tale, but its lessons are as true as those taught by any fable. The picture on the jacket of Thomas and the Dragon Queen sets the tone of the tale of small against large.

Thomas would make a very good cartoon character for the movies. Stuart Little has done much to soften our hearts about those who are small yet resourceful, but he is still a mouse. Thomas is a real boy, and he has lot to teach all of us.

Thomas and the Dragon Queen is available for purchase on Amazon.com