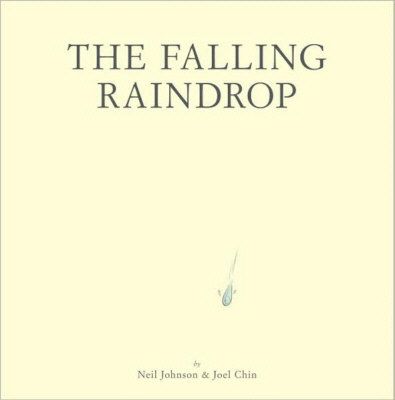 The very young are often troubled with overwhelming fears, and just a word from a concerned parent is not enough. Neil Johnson , a director for an American advertising firm in Singapore, faced just such a problem with his young son who was terrified of lightening, thunder, and rain. While standing at a window during a tropical rainstorm, the boy asked one of those stunning questions with which children stump their parents. The boy asked if the raindrops were scared too. The father's answer became this very insightful story.

The Falling Raindrop tells the story of a little raindrop who enjoys his fall until he sees a big change coming as he heads for a campfire. When he gets to the campfire in a moment he turns into steam and begins to rise again as a wisp of steam. As he rises he understands that he will once more join the clouds and become a raindrop again. What had been fear becomes joy as we see a big smile on the face of the little raindrop.

Fortunately, Neil Johnson found a kindred spirit in Joel Chin, who gave artistic conception to the story of the little raindrop. Matching the simple story told in words understandable to the very young, Joel Chin, advertising art director for the same advertising firm, came up with the perfect simple drawings to tell the story. Simplicity is so very important when teaching a concept, and Joel Chin , who grew up in tropical Asia, saw an opportunity to show how this story could be a metaphor for life and encourage one to live life to its fullest. A parent can only wish that these two talented men will team up for more lessons in life to help the young and fearful. There is no better book for a pre-school teacher or a parent to pull out during a thunderstorm than The Falling Raindrop.

The Falling Raindrop is available for purchase on Amazon.com