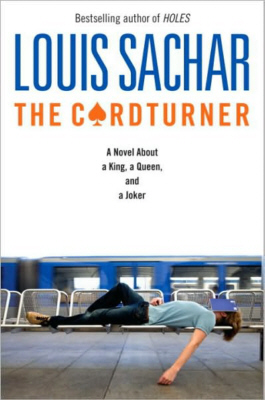 Books that use the game of bridge as part of the plot are few when compared to the list of books that use chess, especially in a young adult novel. Chess is widely played in schools with competitions and after school instructions. There is no widespread teaching of the game of bridge in schools. With this in mind, Louis Sachar, the bestselling author of Holes, has written such a novel for teens. At the same time he has also written a book that adult bridge players will enjoy.

The story is told by Alton Richards, a likable seventeen year-old with a wry sense of humor and a sometimes sardonic view of life. It is summer and Alton has finished his junior year in high school, has been unable to find a job, and his best friend has just taken up with his girl. Since his father has been laid off, the family is financially strapped. Alton's mother is pinning her hopes on her very wealthy, very ill, and very irritable uncle who needs a person to drive him to bridge games and play the cards that he can no longer see. The cardturner cannot do anything at the bridge table but play the cards he is told.. For this job Alton's Uncle Trapp buys him a car and pays him an agreed on amount of cash. Reluctantly, the teen becomes involved in a new world of older people, his uncle's strange life and the mysteries of the people who live at his uncle's mansion on the hill.

Being an avid bridge player himself, Sachar acquiesced to the suggestions of his wife, publisher, and agent and began work on The Cardturner. The problem, as he explains in his a preface, is that explaining the intricacies of the game could slow down the plot. The solution? This is all in chapter twelve, after you have already come to like the down to earth hero, Alton. Alton explains that just as you might have skipped part of Moby Dick when the author began to describe something in detail, you can use the whale icon as a hint that you can skip to the summary box for a concise explanation of the real consequences for what cards have just been played.

Non bridge players should read the book first using the whale to skip detailed explanations and get to the story. Chances are that after you finish the story, you probably will want to go back and lay out the hands just for the experience. The Appendix is a gem of succinct explanations of a complicated and endlessly fascinating game, and it gives page references that explain what was really happening in the games.

Perhaps the reader will remember that one's mother and aunts used to play bridge, and conclude that it is a less than exciting pastime. But also remember that two of the most financially successful men in the world, Bill Gates and Warren Buffet, are enthusiastic bridge players.

Some teens will read the book because they have enjoyed some of Louis Sachar's books. Chapters are short, there is a teen love story building, and a deep mystery about the people who are still in Alton's very rich, very terse in his statements, and brilliant uncle. Bridge-playing adults will enjoy a book about the game they love.

The Cardturner is available for purchase on Amazon.com