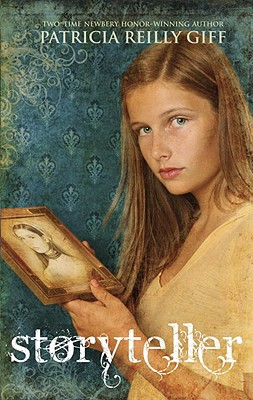 Who among us has not shrugged off the "tales" that some family member has tried to pass on to us? We often ascribe the stories to hearsay, or worse, the prejudicial tales told by a jealous sibling. Storyteller force the reader to take another look at family history, ask for more details, and best of all, write down the stories for the coming generations. Why are these tales important? Family traits have an odd way of becoming manifest in later generations, no matter how diluted the gene pool may have become.

Storyteller by two-time Newberry Award winner Giff begins with a lonely middle school girl who lives with her father, a carver of some kind of wood art that many people seem to like. Having lost her mother early in life, Elizabeth has only one parent. When her father suggests that she stay with her aunt while he goes on a trip to Australia to present his carvings at a university, Elizabeth panics. Stay with her mother's sister? A person she has never met? Elizabeth is appalled, but her father is determined.

Upon arriving at her aunt's home, Elizabeth prepares herself to get along with relatives who are different, and attend a middle school where she knows no one. This is a pretty stressful thing for any middle schooler to handle. Elizabeth learns about the family stories of a long dead relative whom she favors in looks and who had a very frightening life surviving the American Revolution. The strange influence this long dead relative seems to have over her descendants is remarkable. The reader is forced to ponder whether ancestors actually do have some influence over who we are.

Elizabeth's modern day story is told using present tense, and that of her ancestor Zee is told in the past tense. Their stories alternate throughout the book. The two stories are written not only in different tenses, but presented in different fonts. Elizabeth's story is printed in a modern font and announced as twenty-first century while Zee's story is told in a handwriting font and is announced as the eighteenth century. The reader is drawn into the harsh environment of eighteenth century colonists, which is so very different than Elizabeth's modern surroundings. Yet the girls share similarities, and each must face their own challenges in life to find an inner strength.

Reading Storyteller will cause the reader to see family stories in a completely different light, and perhaps will lead to some interesting discoveries.

Storyteller is available for purchase on Amazon.com