Liar, Liar: The Theory, Practice and Destructive Properties of Deception 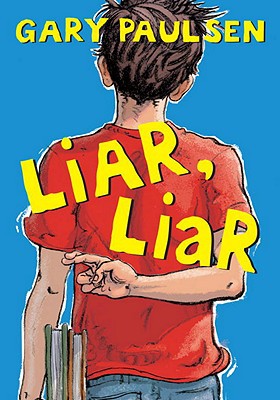 Gary Paulson's newest character, Kevin Spencer, is the most adept apologist for evil since C.S. Lewis' Screwtape. Paulson's unique ability to speak the mind of the nascent adult male in the bumbling reflections of the adolescent is both accurate and hilarious. The reader can enter the logical mind as it works through the problems of outsmarting the adult world and gaining its own ends. It is the puzzling combination of high intelligence filtered through immaturity that sets the scene for an uproarious adventure, culminating in some serious consequences, followed by the first steps of maturity .

If only all moral lessons could be taught to the next generation could be as entertaining as the lessons learned by Kevin, people could laugh themselves into acting human and life as we know it would be quite enjoyable.

Grownups, do not fear that Paulson has written an evil guide to getting one's way through middle school with little effort. Although the chapter headings make Kevin resemble a middle school Sun Tzu writing The Art of War for middle schoolers, with chapter headings such as "A Good Lie Has an Outcome Advantageous to All Parties," and "A Good Lie Can Support Any Plan," all ends well with a chapter entitled "A Good Lie Is An Oxymoron." In the conclusion, Kevin realizes that his actions have had a serious effect on his own family and does what must be done. Liar, Liar is a comic romp through middle school trauma and is definitely a long chuckle with intermittent LOLs.

Liar, Liar: The Theory, Practice and Destructive Properties of Deception is available for purchase on Amazon.com