Jim Henson, The Guy Who Played With Puppets

by Kathleen Krull, Illustrations by Steve Johnson and Lou Fancher 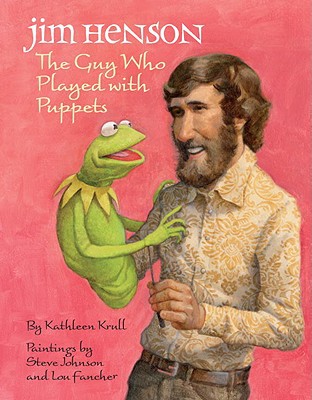 Kids are asked that dreaded question all the time by grownups trying to be helpful. "What do you want to be when you grow up?" Most kids have a grown-up pleasing answer. Jim Henson did not. According to his biographer he filled notebooks with ideas, and drawings of animals. Jim was drawn at an early age to plays and making people laugh. When his father, a biologist, wanted him to prepare for a career in science, Jim only wanted to work with puppets in a TV format. Jim Henson grew up along with TV, and soon he was employed at a local TV station. While he was in college, he got his own TV show. Later, on a trip to Europe, he found that the art of the puppeteer was greatly admired there.

Henson's story illustrates the importance of finding a career path that really excites one. Jim Henson, The Guy Who Played with Puppets is an exciting biography which will inspire young readers to think of rewarding occupations, other than the usual, uninspired choices of rock star or professional athlete. Readers will be inspired to find their own, inborn talents and not worry so much about what others may be thinking.

The paintings by husband and wife team, Steve Johnson and Lou Fancher evoke the simple beginnings that nurtured the career of one of the giants of TV entertainment. One sees Jim as a happy boy growing up in a small town called Leland, Mississippi. One painting shows him in an innertube floating in a small stream. Another shows him talking to his grandmother while they sat on the porch of a frame house. Other paintings show Jim as he reaches up to work our favorite puppets. The illustrations appear to be softly drawn to invoke in a gentle way the memory of a beloved personality.

Jim Henson, The Guy Who Played with Puppets would make an excellent Christmas present for a child or a Muppet fan.

Jim Henson, The Guy Who Played With Puppets is available for purchase on Amazon.com