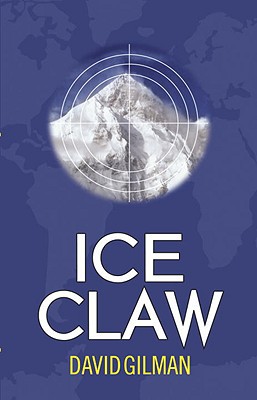 Ice Claw, originally printed in England in 2008 by Puffin Books, is the second book in The Danger Zone Series written by David Gilmon, who has had his own share of adventures all over the world. After years as the principal writer for the British detective series A Touch of Frost, Gilmon decided that he would like to write about an adventurer for young people. His main hero is named Max Gordon. He is 15 years old, and a student at an Outward Bound school situated in the rugged country of southwestern England.

Ice Claw is not a book that is easy to put down. It will hold the reader in the unrelenting grip of a skilled storyteller. Set in the winter in the rugged French Pyrenees, Max Gordon has entered in a triathlon for juniors. The adventure begins with two friends, Max and Sayid, who have made a wager that one of them can get to the bottom of the mountain first. Max will use his snowboard, and Sayid will use skis. Unfortunately Sayid tries to win by getting off the trail and sustains a painful ankle injury when he hits a tree hidden by snow. While Max tries to help, both boys realize that an avalanche is coming their way fast.

The plot twists and turns in every chapter. Max enters the downhill snowboard race only to discover that the person behind him is trying to shoot him. From that point Ice Claw proceeds at a rapid pace with lots of insider facts about extreme sports and a deepening mystery about who is trying to kill Max. As the story continues, there is a never-ending cast of characters that Max must deal with as he tries to unravel the mystery of the last words and gift of a monk who is being pursued by a sniper. Max tries to save the monk, but is left instead with the doomed man's dying message and an amulet.

Ice Claw is an adventure that has been enjoyed by English middle school students, and now it has made it to the USA. There is no doubt that it will entertain American teens as well. David Gilman is a talented writer who moves the action at a rapid rate, while bringing in little known facts about science, extreme sports, and the dire possibilities of an unsafe world. Even diffident readers who pick up this book are bound to become enmeshed in Max's amazing adventures.

Ice Claw is available for purchase on Amazon.com